Most States Could Power Themselves

~ Via Grist, the Institute for Local Self-Reliance has issued a report that shows 31 states could generate all their energy needs for local renewable sources. Sadly, the report is over a year old, but a quick scan suggests that the data is probably still pretty relevant. 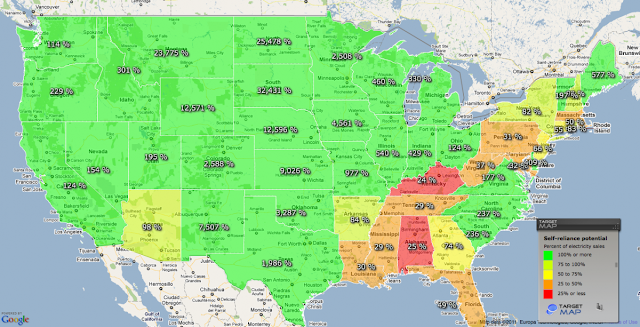 States in green could generate more than 100% of their needs. Those in red, 25% or less. Orange and yellow states do better than the red ones, but still would require energy imports or other ways of meeting their local demand.

What the map does show clearly, however, is that there could be a very strong political majority for energy self-sufficiency, if only the argument were made, and the bogus counter-arguments, especially about jobs, could be debunked.
Posted by Unknown at 11:18 PM