~ This website has been around a while, but it has been freshened up lately because of Shell Oil's imminent plans to start exploratory drilling off the coast of Alaska. A sample crowd-sourced advertisement for Shell's "Let's Go!" campaign: 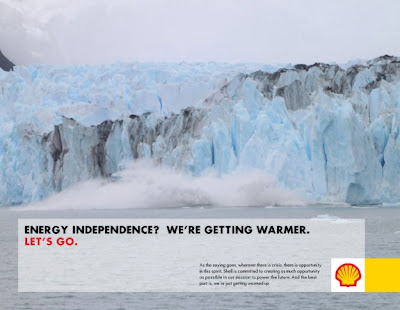 It takes a few minutes of poking around for most to realize that this is not an official Shell Oil website, but a very clever and detailed parody. Like all good satire, it is darkly humorous and all-too-plausible.

Concerns about offshore oil development in the Arctic are well-founded, despite official nonchalance, and recent events only add to the grim sense of foreboding.

Other worthy websites:
The Dark Money Universe
Animated Ocean Currents
Animated Wind Map of the US
Want to Get Away?
Periodic Tables
The Earth
Political Horse Race
Be Funky

Update: forgot to add Dark Money Universe to the list.
Posted by Unknown at 11:12 PM