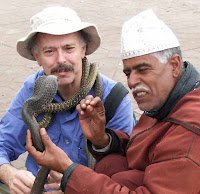 
It’s a scientist’s duty to be properly skeptical. I still find that much, if not most, of what is attributed to climate change is speculative, exaggerated or just plain wrong. I’ve analyzed some of the most alarmist claims, and my skepticism about them hasn’t changed.

Muller is a scientist, and thus, a skeptic. He's still a climate change skeptic, but has turned his deeply skeptical faculties to the question, and come to a definite conclusion:


Three years ago I identified problems in previous climate studies that, in my mind, threw doubt on the very existence of global warming. Last year, following an intensive research effort involving a dozen scientists, I concluded that global warming was real and that the prior estimates of the rate of warming were correct. I’m now going a step further: Humans are almost entirely the cause.

When even bright but curmudgeonly researchers funded by industry conclude that burning fossil fuels is changing the climate, isn't it time to stop posturing and start doing something about it?
Posted by Unknown at 11:44 PM