What Could Possibly Go Wrong?

~ We need detailed scrutiny before, not after disasters. 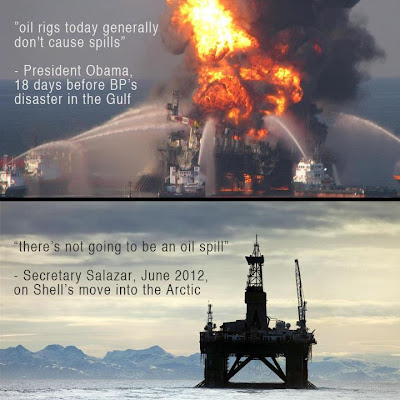 It's true (perhaps) that oil rigs don't "generally" cause (larger) spills, but oil spills are routine. The spilling of oil is a "systemic" problem:


“Do we have a single company, BP, that blundered with fatal consequences, or a more pervasive problem of a complacent industry?” [BP spill] commission co-chairman William Reilly, a former administrator of the Environmental Protection Agency, said in a statement. “Given the documented failings of both Transocean and Halliburton, both of which serve the offshore industry in virtually every ocean, I reluctantly conclude we have a system-wide problem.”


The equipment and practices used in offshore drilling have been designed by oil company engineers and approved by regulators. Industry can be expected to do the minimum necessary, spending as little as possible, because maximizing profit remains the only priority of Big Oil. Government regulators, however, must be held accountable since it is their job to insist on safety for workers and communities. Spill commission co-chair Bob Graham:

The core problem is that real safety costs quite a bit of money. The fines levied after a spill are much cheaper, so industry skimps on safety and pays the fines when something goes wrong. The fines are merely a cost of business, and a cheaper one than real safety measures.


Parnell said he was impressed by Shell's readiness to handle a spill in the slushy, remote waters amid concerns that such a disaster would strain Coast Guard re-sources and local infrastructure.

"It's one of the myths ... that help is somehow thousands of miles away, when you've got a lot of capability there, not only on the prevention side, but also on the spill response side," Parnell said.

Murkowski said she too was assured Shell would proceed safely.

"Assured." The industry's sales job, again, is basically, trust us, we really care about safety. Added Murkowski, "I think they know as well as anybody that there is no margin for cutting corners."

The drumbeat for unfettered drilling continues from the API, and the assault on regulations in Congress remains relentless. Interior Secretary Ken Salazar says that they have amnesia about the BP spill in the Gulf of Mexico. Maybe they do, but they certainly expect the American public has amnesia at least as severe. Cash is king, and Big Oil has lots of cash they can use to reduce regulations and keep fines small.

And that is why we will continue to have spills and deaths of people and ecosystems. This is what the systemic problem looks like.
Posted by Unknown at 11:23 PM