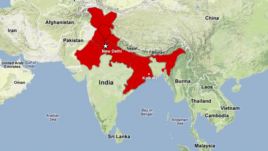 ~ As much as 10% of the world's population is without electricity following the second massive grid outage in India this week.

Blame is being spread around among an outdated, rickety grid, a lack of generation capacity, government inefficiency and corruption, a failure to follow agreed-to consumption limits by various states, poor energy pricing that encourages wasteful consumption, and, as one routinely expects from the corporate cheer-leading quarter, supposedly strangling environmental regulations. All of these are true at least in part, but the bigger cause is a failure to plan and build a stronger commitment to renewable energy.

India's generation is mostly from coal and some of the problems are directly attributable to that dirty fuel. It is an environmentally ugly fuel to extract, process, and use, and restrictions designed to protect the health of workers, communities and the environment are exacerbating a coal shortage. Monopoly control of the coal supply prevents a market response to fill India's ever-growing demand. Government policies, particularly on tariffs and subsidies, are poorly aligned with supply and demand realities.

One solution would be to gut regulations, and turn production and pricing over to private enterprise—throw open coal generation to an economic free-for-all. While this might provide more reliable power for business and the upper castes, it would condemn many others to forgo electricity and return to burning whatever can be gathered. It would do nothing to help most of those sweltering in the Indian summer's heat and humidity. It would lead to vastly more environmental degradation.

A better solution would be to increase emphasis and support for renewable forms of generation. Distributed generation, especially from canal turbines, would be a perfect fit for rural needs. The broad solution for centralized urban power generation, however, is wind. Not only does India have its own indigenous industry leader in Suzlon, but wind is already cost-competitive with coal in much of India.

India routinely suffers planned local outages due to a lack of supply to meet burgeoning demand. These unplanned and geographically broad outages are a sign of policy failure, and are destined to become more common without a change in approach. Renewable energy is the right change, and should be grown from it's current 12% (plus an additional 13% in hydropower.) It's already proven as part of the solution.
Posted by Unknown at 11:08 PM