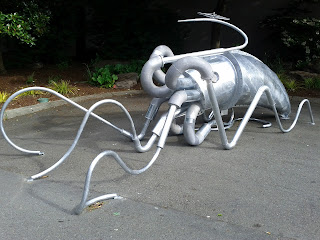 Want to buy a 7-ton statute of a controversial Marxist intellectual/dictator? 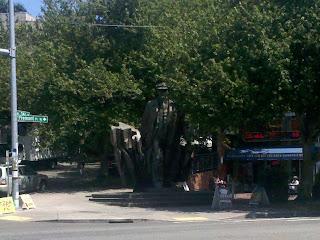 Last week's picture shows Fremont's unlikely larger-than-life statue of Vladimir Lenin. The statue is unique in several respects. According to the Fremont Chamber of Commerce:


This cast bronze sculpture of Vladimir Lenin was created by Emil Venkov... a Slavic artist who has worked in bronze for over thirty years and who is widely exhibited in Europe and the United States.

Weighing over 7 tons, the sculpture took ten years to complete and was installed in Poprad, Slovakia in 1988. It is unique. We believe it is the only representation portraying Lenin surrounded by guns and flames instead of holding a book or waving his hat. The sculptor, while fulfilling the requirements of his state commission, was nevertheless able to express his vision of Lenin as a violent revolutionary; not just an intellectual and theoretician.