It Can Be Done 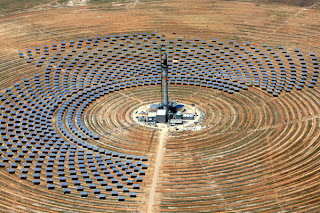 ~ Many have asserted that renewable energy generation is impractical because it is too variable and too intermittent. Not true, as installations in Spain demonstrate:


Gemasolar, which officially launched last month (May 2011), is a 19.9-MW plant with a 15-hour ‘battery’. Gemasolar’s expected production is 110,000 MWh per year—or about enough to fully power 25,000 households. Because it can store energy, this 19.9 MW generates the equivalent of a 50 MW solar power plant without storage, according to Mr. Arias.

Gemasolar’s battery consists of two tanks of molten salt thermal energy storage that allows the solar plant to generate on-demand electricity: during the evening, during cloud cover or rain, or even days or weeks later.

Gemasolar, and similar renewable energy generation installations is part of the solution that allows us to create a renewable energy future. It is possible with wind too.
Posted by Unknown at 11:34 PM