Why Are We So Dumb?

Because We Choose To Be 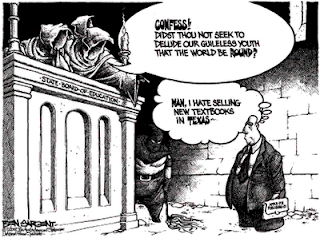 ~ To be competitive, whether as nation, as a business, or as an individual, today requires relentless innovation and unflagging drive. These are core traits of the successful entrepreneur and the use of which are widely touted as key to resolving our economic woes.

There is a growing recognition that our educational system is largely failing to graduate workers who are competitive in the global economy, or even in the prevailing gig economy here at home. To succeed, we must all be entrepreneurs now, at least in mindset and approach, and be able to deftly, creatively adapt to rapidly changing economic circumstance and opportunity.

That requires an inquisitive mind and critical thinking faculties, and that's what education should instill. But look who doesn't get it—the Texas Republican Party:


We oppose the teaching of Higher Order Thinking Skills ..., critical thinking skills and similar programs that are simply a relabeling of Outcome-Based Education [sic] ... which focus on behavior modification and have the purpose of challenging the student’s fixed beliefs and undermining parental authority. [Emphasis added]

Laughably, a few paragraphs before, we find a thoroughly incompatible statement:


We support objective teaching and equal treatment of all sides of scientific theories. We believe theories such as life origins and environmental change should be taught as challengeable scientific theories subject to change as new data is produced. Teachers and students should be able to discuss the strengths and weaknesses of these theories openly and without fear of retribution or discrimination of any kind. [Emphasis added]

One wonders whether this right to question theories extends to the one emphatically repeated as fact throughout the platform—the "Judeo-Christian" religious principles upon which our country's institutions are allegedly based. How would they feel to a challenge based on the Establishment Clause, for example? Another plank prohibits the use of any materials other than those approved by the State Board of Education (with requirement of public hearings on each). Given the Texas Board's historical hostility to progressive viewpoints, the likelihood of challenging such theories on a scientific basis appears remote. There is a substantial amount of other wingnuttery in the platform; it is patently obvious that the right of challenge will be extended only to attack those theories at political odds with the fixed beliefs of that reactionary body.


The essence of the independent mind lies not in what it thinks, but in how it thinks.

The clear message for aligned partisans: feel free to attack that which goes against your a priori beliefs, but squelch any attempted questioning of those beliefs. Now that is truly "education" that is unabashedly outcome-based and ill-prepares students to compete effectively in the world as it actually is.
Posted by Unknown at 11:23 PM