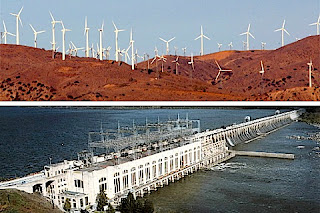 ~ How much do we need a smart grid?

Last week the Federal Energy Regulatory Commission (FERC) ruled that the Bonneville Power Administration (BPA) cannot use its monopoly power to force wind farm operators to curtail generation, an action the BPA took in response to a surfeit of hydro power this past spring.

At the time, BPA claimed that they had to curtail wind generation to protect salmon populations. Wind producers argued that BPA should have continued to buy all their generation and could have sold the power elsewhere. BPA's decision cost them both crucial revenue and the production tax credits on which their financing, and hence, the overall project viability, depended.

FERC has now largely agreed with the wind farm operators that BPA could have sent the power to California and instead curtailed generation there.


Wind farm owners, including independent developers and utilities who own their own projects, say the problem is about money, not too much electricity.

"The agency has painted this issue as being about fish and physics," said Stefan Bird, senior vice president at PacifiCorp Energy. "It's about discrimination and dollars."

The contractual obligations and the practices and regulations around both electrical power marketing (BPA's primary function) and grid operation are byzantine, and appear increasingly ill-suited to the rapid changes in the electrical power industry.

BPA managers must now change its policy for such situations, but what exactly will they do? It is easy to cheer the triumph of local renewable energy in this spat, but what will become of the curtailed generation in California next time? The lawsuits are only just beginning. When it happens next time, as it almost surely will, BPA may well make a different choice, and the gored ox will belong to someone else. But won't they sue too?

The problem is not and should not be seen as one of too much renewable generation. The problem is an electrical grid that has never had a top-down design, but which has evolved and grown reactively for over a century. For all the sophistication that has been grafted onto it to respond to changes in supply and demand, it is still, on an engineering basis, figuratively constructed of bubblegum and baling wire.

We need a smart grid.
Posted by Unknown at 9:00 PM