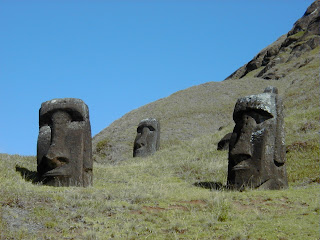 ~ Many people insist, with all manner of justifications, that we can not, we should not, change the way we generate or use energy because we're not running out of oil, the climate isn't changing, and we aren't destroying our ecosystems everywhere one looks. Cornucopia forever.


What did the Easter Islander who cut down the last palm tree say while he was doing it?

In fact, the question can be asked more broadly: “What were the thought processes and discussions amongst the inhabitants of Easter Island leading up to the removal of the last remnants of forest?” This could be seen, perhaps, as a hypothetical exploration, rooted in a real historical event, of “the psychology of resource depletion denial.”

A foreshadowing of the looming twilight of the Oil Age. The way of life on Easter Island wasn't negotiable either. The result?


As the forests shrunk in area and the annual percentage rate of depletion steadily increased, at some point, someone must have realised that the situation was not sustainable and said as much. The island is not that big and what was happening at one end would have been common knowledge at the other end.

Yet the inhabitants continued on. The forest dwindled to nothing and the soil washed away, depleted. Crop yields dropped. Felling trees destroyed animal habitat and then the animals. Food became scarce, leading to famine, inter-tribal warfare and eventually cannibalism. The population crashed in a mass die-off.

Will we heed those who today speak out that our resource extraction is not sustainable? Or will we wait for failure and famine first?
Posted by Unknown at 11:58 PM