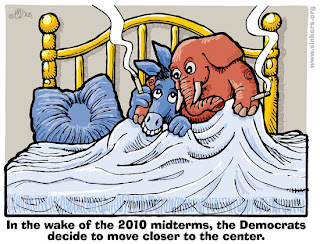 ~ Voter disgust is growing with both political parties.

There are several reasons, but the overriding one is that there are few real differences between the parties on issues that matter to most ordinary voters, i.e. those who belong to the 99%.

Ron Paul states this plainly, which is why his popularity has been growing (although he has no chance of winning.)

Don't believe it? Each party has their outliers, but the leadership of each mostly agrees. The media makes the most of small differences, fomenting often phony controversy for their own interest in attracting and retaining market share. The parties are the same (with only small differences of degree) when it comes to:

By the same token, the Tea Party (before it was co-opted by the GOP) and the Occupy Movement (in the target sights of the Democrats) have much in common (despite many outliers) and both pose the same threat to both parties.

A political realignment is desperately needed for the health and future of the country. This can only happen by a vigorous and sustained popular movement that starts by addressing the core problem: the perversion of democracy by moneyed interests and the growing legitimization of creeping fascism.