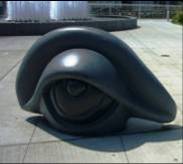 Last week's picture would have been much easier to figure if I had showed the same thing taken at night, or taken from an angle that, unlike the one I used, did not deliberately and confusingly overlap two sides of the sign: 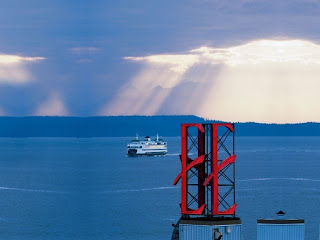 The picture is, as most locals can now readily see, the large neon letter 'E' atop the famous Edgewater Hotel on the Seattle Waterfront at Pier 67. 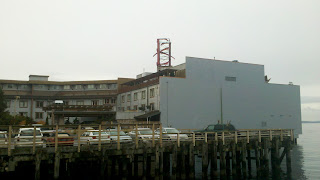 The Edgewater is Seattle's only over-water luxury hotel on Puget Sound, and is an international landmark. Built in 1962 (ostensibly for the World's Fair) it was briefly named the Camelot. It's 234 rooms have hosted many music and entertainment celebrities, including:

At one time the hotel advertised that guests could fish from their room windows, and even provided gear to do so. Not all guests behaved themselves, however, so the hotel quietly shelved the promotion.