Electricity in the Developing World 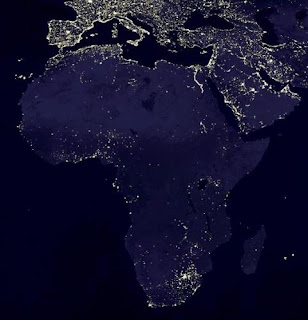 ~ The need for electricity throughout the developing world is immense and will continue to grow. Unlike in the industrialized countries, much of the developing world does not have large centralized power plants and transmission lines to carry that power to widely-spread users. Nor are they likely to ever have such a system:


Building out the power grid can be prohibitively expensive, which is why in many countries, like Haiti, less than three quarters of the population have grid access. Pike Research’s Clint Wheelock says just for the transmission portion alone it can cost at least $500,000 per mile. And that’s without the distribution portion and any kind of the grid intelligence (smart grid) that is getting all of the investment this year.

The cost of building such a system is compelling, as is the cost of maintenance, including the very real problem of preventing people from tearing down the wires or ripping up other installations to steal and sell the copper or whatever else of value that can be stripped. There's a compelling parallel:


While developed nations slowly replaced landline telephones with cell phones, developing countries completely skipped traditional telephone infrastructure and got their first communications via cellular. The reason is pretty simple — the cost of connecting every home with a landline is a lot higher than dropping a cellular base station every couple of miles.

The appropriate technology is distributed generation.

Solar is already a commercially proven technology well-suited to distributed generation in remote or off-grid areas. However, it doesn't work at night and is still relatively expensive compared to other sources (although the cost is coming down.) Small wind also is good for distributed generation, although it too is limited by intermittency and variability. Of course, the scope of the need is broad, and available renewable resources vary widely. The full range of available technologies will be needed to fully address energy demand in the developing world.