Another easier one... where in Seattle is this? 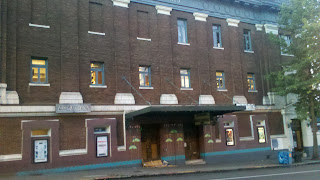 The building was erected in 1915 and has been a single-screen theater about 30 years.


The Egyptian Theatre is located on Capitol Hill near Downtown Seattle and features a wide array of independent film, foreign language cinema, documentaries and restored classics. It was originally built as a large Masonic Temple, with offices, a main auditorium, and a smaller auditorium. In the 1970s, the Masons used the large auditorium as a wrestling arena to earn extra money. In the early 1980s it became the home of the Seattle International Film Festival, at which point the founders of the Festival moved in and gave the theatre its current Egyptian décor. The Egyptian continues to host SIFF, the largest film festival in North America.

Although I was unaware of its history at the time, it was one of the first places I saw a movie in Seattle when I first moved here in early 1982. SIFF still shows films at the theater, but the new home is at Seattle Center.
Posted by Unknown at 11:08 PM