Not Just Another Fish Story 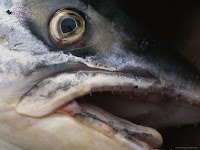 ~ In poker a person who doesn't know what's going on is called the fish. The fish is destined to lose all his money. There's a long-time saying at the poker table about this:


If you look around the poker table and you don't know who the fish is, it's you.

The 99% are really motivated because it's finally become undeniably obvious that they are the fish in Wall Street's greedy game of grift. They haven't been beaten, they've been ripped off. Here are some of the ways:


FREE MONEY. Ordinary people have to borrow their money at market rates. [Banks] get billions of dollars for free, from the Federal Reserve. They borrow at zero and lend the same money back to the government at two or three percent... and lend mortgages to us at four percent, or credit cards at twenty or twenty-five percent. This is essentially an official government license to be rich, handed out at the expense of prudent ordinary citizens, who now no longer receive much interest on their CDs or other saved income... Where do the protesters go to sign up for their interest-free billion-dollar loans?

CREDIT AMNESTY. If you or I miss a $7 payment on a Gap card or, heaven forbid, a mortgage payment, you can forget about the great computer in the sky ever overlooking your mistake. But serial financial fuckups like Citigroup and Bank of America overextended themselves by the hundreds of billions and pumped trillions of dollars of deadly leverage into the system -- and got rewarded with things like the Temporary Liquidity Guarantee Program, an FDIC plan that allowed irresponsible banks to borrow against the government's credit rating...

The [Too Big To Fail] banks all have the implicit guarantee of the federal government, ...which means it's now cheaper for them to borrow money than it is for, say, a responsible regional bank... In other words, the TBTF banks got better credit for being less responsible.

STUPIDITY INSURANCE. Defenders of the banks like to talk a lot about how we shouldn't feel sorry for people who've been foreclosed upon, because it's they're own fault for borrowing more than they can pay back, buying more house than they can afford, etc. And critics of OWS have assailed protesters for complaining about things like foreclosure by claiming these folks want “something for nothing.”

This is ironic because... “something for nothing is Wall Street’s official policy..."

When Joe Homeowner bought too much house, essentially betting that home prices would go up, and losing his bet when they dropped, he was an irresponsible putz who shouldn’t whine about being put on the street.

But when banks bet billions on a firm like AIG that was heavily invested in mortgages, they were making the same bet that Joe Homeowner made, leaving themselves hugely exposed to a sudden drop in home prices. But instead of being asked to "suck it in and cope" when that bet failed, the banks instead went straight to Washington for a bailout -- and got it.

Then there are the tax disparities, where insanely profitable corporations pay little or no taxes, and where Warren Buffet's secretary pays at a higher rate than he does. And finally, there are all those banksters that have been indicted and jailed for the biggest financial fraud and looting of the public purse ever... er, actually no one has been charged or even investigated, much less incarcerated. Restitution? Ha ha.


These inequities are what drive the OWS protests. People don't want handouts. It's not a class uprising and they don't want civil war -- they want just the opposite. They want everyone to live in the same country, and live by the same rules. It's amazing that some people think that that's asking a lot.

The OWS protests are not just about the inequality of outcomes. The last tattered remnants of the social safety net are being shredded. Education, the path to a better life for the hardworking, is being systematically defunded, placing it out of reach of too many. Many willing to work cannot find full employment that supports their family. The OWS protests are being driven by the inequality of opportunities in a system that no longer serves the majority of its people.
Posted by Unknown at 10:12 PM