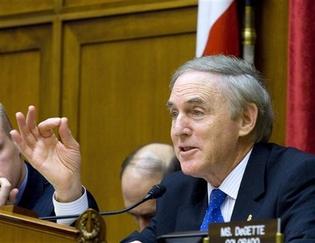 ~ A key Congressman on energy policy figuratively threw up his arms this week, declaring that against China in the global market for solar panels and wind turbines, the US "can't compete." He's wrong, and he's a hypocrite. He also repeats the interesting history of long-term losers clinging to the short-term gains of a vanishing status quo.

Florida Republican Cliff Stearns, Chair of the House Energy and Commerce subcommittee on Oversight and Investigations, stated that federal efforts to support renewable energy were a waste of taxpayer dollars, too risky, and weren't creating jobs. He stated that further green energy loan guarantees be halted "so that they could be looked at more carefully," which is Washington-speak for killing the program.

The White House showed some spine for a change, as spokesman Dan Pfeiffer shot back:


Chairman Stearns and other members of his party in Congress believe that America cannot, or should not, try to compete for jobs in a cutting edge and rapidly growing industry. We simply disagree: the answer to this challenge is not to wave the white flag and give up on American workers. America has never declared defeat after a single setback – and we shouldn’t start now.

He also pointed out that there are more than 100,000 jobs in the US solar industry and another 75,000 in wind, so this is not an industry on which the US should "give up." The US currently is a net exporter of solar technology—$5.6B worth last year.

US Energy Secretary Steven Chu earlier made the case for commitment:


The United States faces a choice today: Will we sit on the sidelines and fall behind or will we play to win the clean energy race?

It's easy to label Stearns a defeatist (which he is) and in the dominant partisanship of our dysfunctional Congress there's no doubt that he is primarily focused on scoring political points.

It's also easy (and amusing) to point out the rank hypocrisy when Stearns says that he is against any kind of energy subsidy. Sadly, this mendacious behavior is quite typical of too many grandstanding legislators eager to exhibit their righteous indignation for the benefit of the media and their preferred campaign contributors.

But whether it is bald-faced lying or willful amnesia, such situational principles are symptomatic of a much deeper trend in human history: how elites cling to what they have and what they know, and resist the inevitable tide of technological change:


In the short run, it’s always better to be a Spanish grandee than it is to be an English weaver. In the 1600s, the Spanish grandees had no reason to innovate since their wealth was already assured, and they were suspicious of the newly invented technology of the printing press. As a result, the economic leadership of the world shifted to northern countries, like England and Holland, where weavers and other tradespeople reorganized to take advantage of the new capabilities that the press afforded them. It took time for this new approach to pay off, but it did. The world changed accordingly, while the grandees gradually fell behind.

Today our own grandees — our economic and political leaders — are making a lot of the same kinds of mistakes that previous elites made. By doing so, they are reducing their chances of dominance in the future. They either ignore the new information technology and miss out on opportunities, or they fear the world it creates and try to co-opt it, shut it down, or control it. This generally fails, their fortunes decline, and a new group of dominant competitors emerges.

Our government is infested with too many American grandees, like Rep. Stearns, who, along with their patrons, appear committed to milking every last dollar of value out of the dying economic and technological model in which they are invested. That it will impoverish the rest of the country and allow another nation to dominate the next technological and economic wave appears to them to be of little consequence.

If we refused to pursue technological advances in our military, even as others made those investments, it would rightly be seen as risky to our long-term security. A Congress that insisted on sticking with uncompetitive defense technology might even be viewed as treasonous. That we would even consider abdicating action to protect our energy future and economic security should be seen as equally foolish and culpable. Can we learn nothing from history?
Posted by Unknown at 11:13 PM