And Picking Losers Too 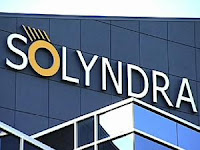 ~ In most things one must take the bad with the good. Who among us doesn't make mistakes even as we believe we aren't?

David Roberts at Grist has another incisive post in a series on the fall-out from the Solyndra bankruptcy filing, where he properly lampoons a popular current flavor of GOP hypocrisy:


In hyping the Solyndra faux scandal, Republicans have gone after the loan-guarantee program with guns blazing. It is, they charge, an example of big government trying to "pick winners." And by golly they just can't support big government picking winners!

Except, uh, turns out they can. In their haste to condemn everything connected to Obama, Republicans have stepped on a bit of a rake. After all, history—recent history!—is replete with examples of Republicans pushing for loan guarantees for energy businesses in their districts.


Roberts nails it when he quotes Boehner spokesman Michael Steel:


This is not politically motivated 'stimulus' spending. It is a sensible, bipartisan energy project that President Obama promised elected officials in both parties that he would support, but is now dragging his feet.

But there's another point worth making in this: who doesn't pick losers too? Once one gets past the idea that it is in the nature of government action to pick winners and losers, it is plain that some losers will end up getting picked at a time when they really look like they might be winners. No one can pick only winners! (If you can, please contact me with details of your astonishing track record; I want you to manage my investments.)

While some point to the money lost on Solyndra as a reason why government should not support cleantech, losers are unavoidable in the process of picking winners too. And in general, the reasons simply don't hold up to scrutiny.

So enough of this bogus "scandal". It's time to get back to the business of trying to pick winners, and that means funding cleantech innovation.
Posted by Unknown at 11:24 PM