This should be easy for some of you. Where in Seattle is this? 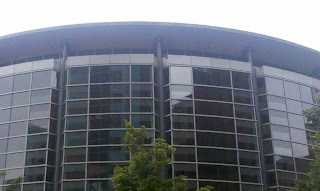 Last week's picture was from the comfort of the Amtrak Cascades dining car as the train prepared to depart Seattle north to Vancouver, BC and shows some of the public art by Jerry Mayer, installed as part of Sound Transit:


Four-foot square traffic-type signs covered in a range of colorful reflective material are attached to sixteen columns opposite the Sounder commuter rail platform. Each sign/artwork has imagery of a simple black shape made up of a combination of traffic sign symbols from arrows, crosses, ‘Y’s and ‘T’s. These shapes have a subtle figurative quality. When seen together, the signs suggest movement in both directions. “Moto/motor/to move/motion—that’s the starting point,” says Mayer. "Let people’s imagination take it from there.”