The Cost of Energy

What We (Could) Pay 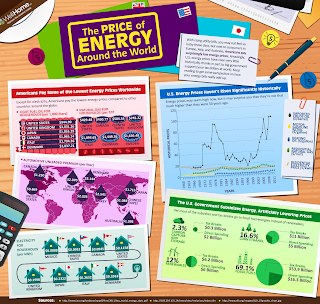 ~ The real price of energy in the US has not much changed in half a century. Except for oil, the price of which has hardly stood still, often on its way to sharply higher levels.

It is interesting how much people complain about energy costs, especially when one compares what people pay in other countries. The US has some of the cheapest energy in the world, partly due to the subsidization of energy by the US government.

Some in Congress argue for cutting $122B in subsidies to the fossil energy interests over 10 years, an action that would do little to reduce Big Oil's profits. Despite protests from Exxon and others, it would also have negligible effect on their operations (in no small measure because it would reduce their profits so little.) Of course, $12B or so per year isn't going to fix the deficit problem, but no one thing will. Instead it's part of the larger set of things we will need to do; just a step, but a good one worth doing for more than just budget reasons.

Energy subsidies artificially lower the price of energy, hiding its true cost. This distortion discourages the efficient use of energy as well as the impetus to develop more sustainable energy sources. It perpetuates uncompetitive behaviors and retards the progress we could be making on long term solutions.

At a minimum, if Congress is going to ax renewable energy programs (e.g. Section 1603) that have spurred development of renewable energy and created jobs, then surely it must be time to cut subsidies all around, and especially those that have had minimal stimulative effect.
Posted by Unknown at 11:15 PM