It's Lapping Ashore in Miami 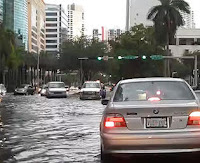 ~ Apart from those that think climate change isn't happening, there are those that accept the evidence of it, but think it remains a distant problem that is secondary to more immediate concerns. If you live in any number of Pacific islands of course, you know the problem is serious and immediate.

It turns out the signs go beyond inundated islands, melting glaciers, loss of shellfish, disappearing arctic ice, dying coral reefs and other evidence that seems to some perhaps to be far enough removed from where we live in the US.

Today, Miami is seeing rising ocean levels on its city streets. At high tide, salt water seeps up from underground, flooding roads. The problem is not remote, but is growing, with the flood waters are getting higher and more frequent. Unchecked, the problem threatens not just the natural beauty of the area and environmental treasures like the Everglades, but also the Biscayne Aquifer which supplies nearly all of South Florida's water supply.

While her office does not estimate the potential cost, she notes that addressing it will eventually require tax increases. Living in Miami-Dade is like


...a paradise... but it has a cost, and climate change will increase that cost... A lot of our community would rather just be in denial about all of this."


My greatest hope is that we say "Oh my goodness, let's fix this problem. We'll live better, it will be good for the economy, and we'll survive."


Kipness says he never saw such flooding until a decade ago, but now sees it up to twice a day during the fall, when tides are especially high. He says he's watched the undersides of $100,000 cars get rusted away by salt water.

Miami is one of the world's most vulnerable cities to rising sea levels from climate change, according to the international Organization of Economic Cooperation and Development. Sea levels have risen nine to 12 inches here in the past century, and are expected to rise up to six more inches by 2030, 12 to 21 inches by 2060, and by three to five feet by 2100.

What will this look like? With a two-foot rise, water would cover 28 percent of South Florida and wetlands would be lost as far from the coast as Homestead, about a 125-mile drive from Key West. Miami would become a barrier island, Hal Wanless, chair of the University of Miami's geology department, told members of the Society of Environmental Journalists, which held its annual conference here last week.

With a four-foot rise, 48 percent of the land in South Florida would be soaked, the Everglades would become an estuary, and two proposed nuclear plants at Turkey Point along the eastern coast would be underwater. At five feet of rise, storm surges would flow in all directions. At six feet, 56 percent of the land would be gone and 73 percent of what's left would be less than two feet above sea level.

A Tufts University study estimates the costs could be $345B per year in lost economic activity if nothing is done. "Doing something may seem expensive, but doing nothing will be more expensive."