Its Advocates are Anarchists 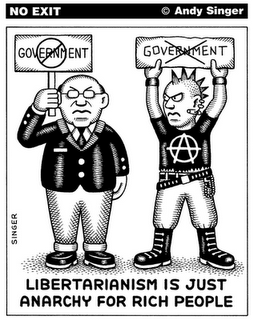 ~ While organized climate change denial is correctly seen as an attempt to protect incumbent financial interests, it is also a proxy fight in a larger ideological battle between unconstrained individual freedom and the structures and strictures people adopt as groups in more or less civilized societies.

The United States, uniquely among all nations, has a constellation of corporations, politicians, "think" tanks, foundations, front men and astroturf entities working tirelessly to advance organized climate change denial. Now in chapter 10 of the Oxford Handbook of Climate Change and Society, professors Riley E. Dunlap and Aaron M. McCright provide a footnoted catalog and scholarly analysis that details the who, how, and why. Their conclusion is understated but precise:


Because of the perceived threat posed by climate change to their interests, actors in the denial machine have strived to undermine scientific evidence documenting its reality and seriousness. Over the past two decades they have engaged in an escalating assault on climate science and scientists, and in recent years on core scientific practices, institutions, and knowledge. Their success in these efforts not only threatens our capacity to understand and monitor human-induced ecological disruptions from the local to global levels, but it also weakens an essential component of societal reflexivity when the need for the latter is greater than ever.

Many of these cataloged denier groups coordinate with each other, and funding for them mostly flows from fossil fuel interests and those (like the Koch brothers) who have been substantially enriched by the fossil fuel industry. (A large diagram from the chapter can be found here.)

However, the organization in organized climate change denial is not one of central direction and direct coordination. Most of these actors are instead organized around a shared ideological underpinning: conservative free-market fundamentalism:


The motivations of the various cogs of the denial machine vary considerably, from economic (obvious in the case of the fossil fuel industry) to personal (reflected in the celebrity status enjoyed by a few individuals), but the glue that holds most of them together is shared opposition to government regulatory efforts to ameliorate climate change, such as restrictions on carbon emissions. While the claims of these actors sometime differ and evolve over time (there's no warming, it's not caused by humans, it won't be harmful, etc.), the theme of 'no need for regulations' remains constant. A staunch commitment to free markets and a disdain of governmental regulations reflect the conservative political ideology that is almost universally shared by the climate change denial community. This suggests how the diverse elements of the denial machine are able to work in a compatible and mutually reinforcing manner even when their efforts are not necessarily coordinated...

Viewed through a broader theoretical lens, climate change denial can be seen as part of a more sweeping effort to defend the modern Western social order, which has been built by an industrial capitalism powered by fossil fuels. Since anthropogenic climate change is a major unintended consequence of fossil fuel use, simply acknowledging its reality poses a fundamental critique of the industrial capitalist economic system. European scholars such as Ulrich Beck and Anthony Giddens describe the current era as one of 'reflexive modernization,' in which advance nations are undergoing critical self-confrontation with the unintended and unanticipated consequences of industrial capitalism—especially low-probability, high-consequence risks that are no longer circumscribed spatially or temporally...

This "reflexivity movement" seeks, at a societal level, self-examination and aims toward self-improvement. The despoiling of society's common assets, such as the environment, and the health and well-being of civilization is harmful also to each of us as individuals. That such harm to our commons is spatially and temporally diffuse makes it easier to dismiss or ignore as an abstract issue or a distant problem, rather than one that demands introspection and response.

We live in a time where individuals, pursuing their own self-interest, can and have collectively wreaked havoc. The mortgage market shenanigans, ensuing housing market collapse and financial meltdown were all born of exactly this kind of laissez-faire ideology. The burning of fossil fuels, the carbon loading of the atmosphere, the acidification and slow death of our oceans, the increasing frequency and severity of extreme weather events, and all the other consequences of these are the same pattern, albeit on a longer time frame.

The battle between the reflexive and anti-reflexive forces is long-standing and takes many guises. It is at heart the tension between the rights of the individual and the rights of the community of which that individual is a part. It is the tension between individual freedom and the rule of law. And it is that frisson that births cries of socialism and dark forebodings about big government on one side and fears of social Darwinism and corporate capture of government on the other.

Vehement anti-reflexive opposition to climate change is but one front in a broader war to assert primacy of individual freedom over any societal goals or needs. It springs from a belief that only individuals can accomplish anything of value. Individuals acting in concert are only capable if a private collective; public ones are deemed a priori incapable, notwithstanding how they are composed or what ends they seek. Finally, organized climate change denial exists because of the deeper fear that government regulation entails an unacceptable loss of personal freedom, allows government becoming too powerful at the expense of the individual, and in more febrile minds, the taking of private wealth for communal ends.

Does government exist to protect the rights of individuals to do as they please, or to protect society from rogue individuals? The answer, of course, is both. I don't know anyone who would willingly take on the high-consequence risks of uninspected food, or airplanes, or who would wish the abolition of the local police. We want to be left alone to pursue life, liberty and happiness, but we want to be protected from those that would, for their own selfish ends, take our individual rights from us.

Thus, government has a necessary role in acting on climate change, and the organized climate change deniers should be viewed essentially as anarchists. They advocate economic, social and environmental carnage believing that they themselves will prosper in such chaos, or at least better than those other individuals, perhaps their former neighbors, against whom they would be pitted in a Darwinian struggle for survival.

The anti-reflexive forces insist that we must change nothing. But change is coming whether we change ourselves and our practices, or not. Will we shape that change, or allow its unstoppable violence to shape us?