He was no Charles Barkley

~ He actually was a role model. Started from less than nothing. Hit bottom and bounced back higher than ever. Completely changed three industries by sheer daring and force of will. A perfectionist, creative genius, relentless taskmaster, leader and visionary.

Various quotes and sound bites have filled Facebook for the past day. What Steve said: good, and powerful, because the words and what they express are unashamed and backed by the force of being authentically lived.

I remember the hush-hush prototypes of the SAND (Steve's Amazing New Device, what would be the first Macintosh) that we engineers got to see and work on at Microsoft back in 1983. I remember looking at that, and then at the PCjr, the Osborne-1 and the other timid advances of the time that could hardly compare. I think many of us were envious of the technical virtuosity and the daring of something so different, so unexpected, so compelling.

Today, in a gesture of respect, Microsoft lowered the flag at the Redmond campus. Interestingly, it wasn't the US flag or the state flag: 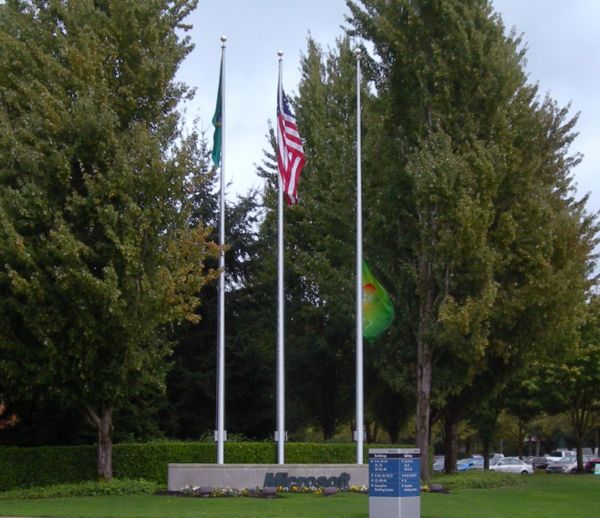 Apple never did acknowledge its debt to Xerox PARC, but evidently Microsoft Windows can respect its elders.

Our country could use a lot more like Steve Jobs--creative entrepreneurs who don't make excuses or complain about the government, regulation, taxes, laws, China, the competition or much of anything else, but just boldly and relentlessly be a champion for their vision, their industry and their customers.