The Existential Angst of the Plastic Bag 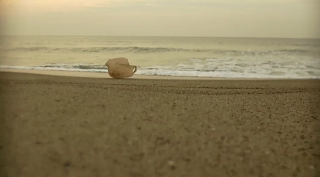 ~ Our oceans swirl with tiny bits of plastic. The infamous Great Pacific Garbage Patch, its North Atlantic cousin, and the rest of the 5 gyres contain vast uncalculated quantities of plastic debris that cannot be recovered, cannot be turned into islands, and cannot conceivably serve any good purpose.

Instead, that plastic enters the food chain and in time, we end up eating it. It's a simple thought exercise in sustainability. We don't poison our environment in isolation—we poison ourselves too.

On a related but more bittersweet note, enjoy this 10-minute short on the conflicted life of a plastic bag.


This short film by American director Ramin Bahrani (Goodbye Solo) traces the epic, existential journey of a plastic bag (voiced by Werner Herzog) searching for its lost maker, the woman who took it home from the store and eventually discarded it. Along the way, it encounters strange creatures, experiences love in the sky, grieves the loss of its beloved maker, and tries to grasp its purpose in the world.

In the end, the wayward plastic bag wafts its way to the ocean, into the tides, and out into the Pacific Ocean trash vortex — a promised nirvana where it will settle among its own kind and gradually let the memories of its maker slip away.