No More Free Rides on Metro 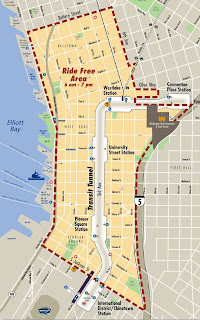 The rationale, tucked away in a PDF says simply:


Phasing out the RFA will increase revenue and have a net positive impact on Metro’s bottom line. It would make it simpler for riders to pay fares throughout the system. A more consistent fare collection system is expected to reduce fare disputes and fare evasion. In a 2010 survey of Metro’s bus operators, eliminating the RFA was listed as the leading strategy to reduce fare evasion.

This is perhaps true, and the solution may well work, but Metro is solving the wrong problem, and the real problem is only going to be made worse.

There's no doubt that the current system allows for some riders to take trips and not pay for them. The problem is the hybrid service area, with part free and part requiring a fare depending on day, time and location. Here's how it currently works:

Obviously, there are a lot of problems with this scheme.
Metro claims it loses $2.2M a year operating the RFA. It calculates this from the number of free rides, but the actual losses might be smaller, as some would not ride the (now free) bus only a few blocks downtown if they had to pay full fare to do so.

Finally, in response to outcry from human service agencies, Metro will still operate some free buses, but they will be smaller "circulator" buses operating in an extended downtown area for the benefit of those who cannot afford to pay. Expect this service to be infrequent, inconvenient, and first on the chopping block in the next budgetary triage proceeding.

Metro realizes that it is losing money to fare evasion with the RFA, and that its plan to implement more RapidRide lines is incompatible with the RFA. Their solution is to eliminate the RFA, but what they should be doing is eliminating the fares. Then everyone could simply get on and off through any door any time, and no one would be evading fares. Problem solved!

Yes, of course that would mean finding funding from sources other than the farebox, and these days that's a difficult challenge. Metro's $549M operating budget in 2011 was funded mostly (61%) from sales tax revenue, a source that has shrunk with the recession. The fare box is the next largest source at 24%.

Our reliance on cars burdens society with a heavy cost. Our road fetish needs to end, as the funds flowing into ever more and broader roads do not increase our mobility, but rather feed a fundamental law of highway congestion—road users increase with road capacity; additional roads do not reduce congestion. Our youth are driving less as societal attitudes change; the future is public transit in vibrant urban cores.

We shouldn't eliminate the RFA to capture a paltry $2.2M on a $549M budget; we should make the entire system a RFA and redirect transportation dollars from cars to sustainable, more efficient public transit. We will create more livable cities, reduce congestion and pollution, and, in the end, save money as well.

Go ahead. Tell Metro what you think.

Cross-posted to the Fare-Free Northwest blog.
Posted by Unknown at 10:46 PM