~ The recently passed Jumpstart Our Business Startups (JOBS) Act might more aptly have been named The IPO Easy On-Ramp Act. This sentiment, offered without a whit of irony, was a key take-away in an excellent overview this morning by attorneys from Silicon Valley's Wilson Sonsini Goodrich and Rosati (WSGR). Over the last 20 years Initial Public Offerings (IPOs) have fallen dramatically: 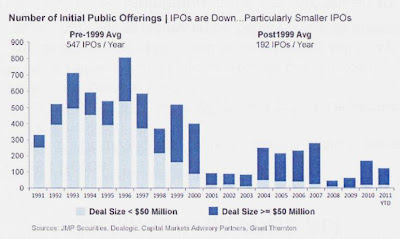 So it isn't hard to see why Title I of the Act is all about IPOs and making them easier to do by reducing limits, regulation and reporting. No doubt lawmakers heard plenty from venture capital firms, CEOs of pre-public companies, the NVCA and law firms like WSGR which would benefit from more IPO deal flow. About 2/3 of the 2-hour presentation focused on this part of the new law.

I've written several times already about this law and the yawning gap between its name and its effect. So I won't repeat that here, but only point out how few are the companies that do an IPO compared to the number of startups of all sizes that are birthed and built every year. Well more than 500,000 new startups are launched every year in the US, but in recent years fewer than 200 on average go public. Title I does nothing for more than 99.95% of all startups, unless you believe naive investors will think their startups will be among the lucky few. It's a bit like boosting the Lotto jackpot to induce people to buy more tickets. Those operating the game make more money; but those playing are no more likely to win, and more players lose than ever.

Building startup companies to success is hard, risky work. Funding is often needed, and investors have a crucial role to play, but greasing the process for the benefit of Wall Street is another thing entirely.

(With apologies to Dire Straits, and to the tune of Money for Nothing)

Title I is mostly effective now; other parts of the Act phase in or are awaiting promulgation of rules and regulations by the Securities and Exchange Commission (SEC).

Tomorrow, I'll post a synopsis of the WSGR analysis of other aspects of the Act, especially on public solicitation and crowd funding.
Posted by Unknown at 11:01 PM