Does Gas Cost Too Much?

~ Politicians have emerged from their usual torpor and seen a shadow on the economy from the price of gas.

Expect six more months of winter, i.e. the winter of discontent and the hibernation of truth and perspective.

High energy costs are a drag on the economy to be sure, but what we pay isn't so bad, even at $4 per gallon, compared to much of the world: 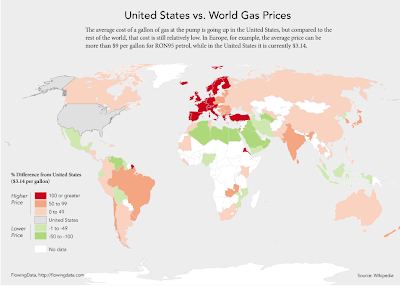 It turns out, furthermore, that higher gas prices don't really change our behavior:


Americans may protest loudly, but their economic behavior indicates a remarkable indifference to the price of oil. In Europe, where taxes keep gas prices well above $5 a gallon, citizens are more likely to take public transportation and live near the center of town. The streets are filled with mopeds and tiny cars. The United States, on the other hand, barely exerts the minimum effort expected of a gas-phobic society: its enthusiasm for car pooling, enhanced public transportation and fuel-efficient vehicles remains relatively low. The average American even spends more gas money on social and recreational trips (about $13 a week, on average) than on their commutes to and from work (around $8). If gas prices truly damage the quality of our lives, we have done a remarkable job of hiding it.

The big problem with gas prices, compared to the price or volatility of other things we buy? Our awareness is forced. Every gas station shouts the price in 2-foot high numbers, and the subject blankets the news. Would our obsession and our reaction be different if there were the same relentless visibility for the price of beer? Or cotton? Or copper?
Posted by Unknown at 11:58 PM