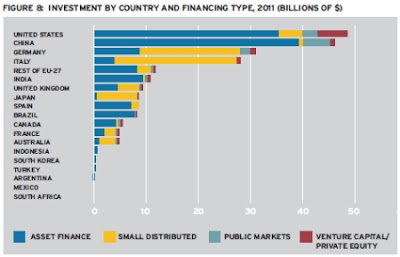 ~ According to the latest Pew Charitable Trusts report "Who's Winning the Clean Energy Race?, the US regained the lead in spending in 2011. China had invested the most in each of the prior two years, and will probably retake the top spot in 2012. Why? Much of the US investment was accelerated in advance of the expiration of critical incentives, particularly the Section 1603 program.


China's pause in clean energy investment growth was a re-consolidation, not a sign of a peak. While the U.S. was cutting incentives in 2011, China was adopting new ones. Not only did China increase a national target for solar deployment to 50 GW in 2010, but they adopted their first national feed-in tariff.

It looks like America is winning the Clean Energy race, but 2011 was just our year to be the hare to China's tortoise. Next year, look for the U.S. to take a nap along the side of the clean energy racecourse, while China resumes its purposeful ramp-up of clean energy investment.

The impact of Europe is somewhat downplayed in the country-by-country chart above. The economies of the US and Europe are of very similar size, but energy is much costlier for Europeans, and is a big driver in public support there for cleaner energy.

Here in the US we persist in the short-sighted notion that we must work to keep existing energy (especially fossil fuel) prices low. It's an effort that cannot be sustained. At length, we will need to much more fully embrace clean energy technology and its fuller realization in our overall economy.

Winning the race is not critical per se for anything other than national pride. However, we do need to at least be competitive in the marathon. Being dependent on other countries and their clean energy industries has implications for national security, national competitiveness and, top-of-mind in this election season, our national economic well-being.

If we act the hare, and awake late in the day to sprint to the finish line, what will be find? Probably that the Chinese and European tortoises arrived some time prior, have taken all the best rooms at the inn and own all the stores and eateries in town.

Do we want to be the consumers or the owners of the future?

Cross-posted to the Northwest Cleantech Blog.
Posted by Unknown at 11:41 PM