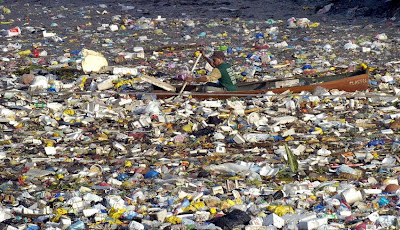 The North Pacific Gyre Garbage Patch contains an estimated 100 million tonnes of plastic, and it's growing.


Captain Charles Moore of the Algalita Marine Research Foundation (AMRF) was the first to find the huge, floating plastic dump in 1997. On the foundation's website, he described it as "just absolutely gross – a truly disgusting plastic cesspool. [It] has to be burned into the consciousness of humanity that the ocean is now a plastic wasteland". 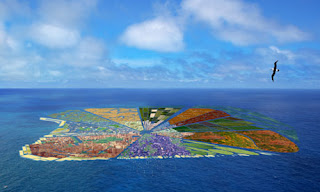 It's like a floating island, so perhaps it could become one?


A floating city of half a million people on a vast plastic island. Does that sound like Waterworld? The vision could soon be a reality if Dutch conservationists have their way. Recycled Island is a plan to clean up 44 million kilos of plastic waste from the North Pacific Gyre, which stretches from California to Japan, and provide 10,000 square kilometres (3,861 square miles) of sustainable living space in the process. Solar and wave energy would provide power for islanders while sustainable fishing and agriculture could provide their food.

It's not Waterworld, and it certainly isn't Perelandra. Living on a sea of plastic doesn't seem very workable unless the disintegration of the plastic could be prevented. Solar radiation breaks it down into tiny pieces, which are then mistaken for food by sea life. How do you build a habitation on something falling apart and being eaten by fish?
Posted by Unknown at 11:45 PM