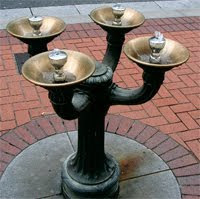 This is a repost from the Hydrovolts blog, originally posted on 5/20/10.

In 2008 the average American consumed 30 gallons of bottled water, primarily from single-serving, single-use plastic bottles. That's 320 12-ounce bottles, or nearly one every day. It's obsessive.

There are many reasons not to drink bottled water.

Bottled water costs more than gasoline. It costs up to 10,000 times more than tap water. It uses 2,000 time as much energy. It has 100 times the life cycle costs.


Contrary to what many believe, it is not healthier. It's not even safer, since the FDA has jurisdiction only over the approximately 30% of water bottles that are shipped between states. Bottled water testing is haphazard and often quite lax. Meanwhile, the EPA has jurisdiction over all water systems that serve more than 25 people. Tap water is tested more rigorously and more frequently too. Check your local water utility's report here.

Bottled water is an environmental atrocity:


According to the Pacific Institute, based on the quantity of U.S. bottled water sales reported by the Beverage Manufacturers Corporation for 2005, 38 billion plastic bottles were sold in the U.S. which used 900,000 tons of plastic, requiring 1.7 million barrels of oil, to make the #2 PETE bottles typically used for commercially bottled water. The production of the plastic water bottles created 2.5 million tons of carbon dioxide, a greenhouse gas contributing to climate change. According to NBC News, the number of water bottles consumed by the U.S., if laid end-to-end, could encircle the Earth 150 times each year. Less than 1/4th of these bottles are recycled, according to the Container Recycling Institute. Most water bottles end up in the landfill, where the plastic may decompose after 1,000 years.

Not included in these calculations is the energy required to bottle and transport water from the sources, especially from such countries as France, Fuji, and Finland to the top consumer nations of the U.S., Saudi Arabia, Brazil, and elsewhere. The additional environmental impact of the long-distance shipping of bottled water adds many times to the environmental impact of the bottled water “carbon footprint.”

The plastic ends up in our oceans since as little as 25% of the bottles and fewer of the caps are recycled.

Still want to drink bottled water? Perhaps you have been hoodwinked by clever marketing.

Do something good for yourself, your bank account and the Earth. Get a reusable water container and learn where your local water fountains are.
Posted by Unknown at 11:44 PM