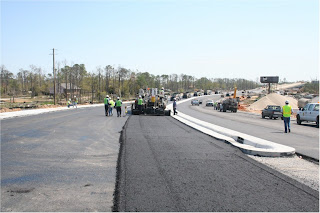 It's bad enough that so much of our transportation fleet runs on oil, but our infrastructure is literally built on oil as well--most of our roads are made of asphalt (asphaltic concrete) which is 5% petroleum by-products. So, it's good news that asphalt is routinely re-used in new road projects when torn up during road work. It's even better news when less is used in the first place. In Pennsylvania they're using a "cold" asphalt that increases re-use and costs a fraction of the traditional stuff.


The material is made from asphalt that is milled and collected during road construction projects. The millings are crushed, ground and injected with oil and water before being applied and rolled. The road is sealed with tar and chips or a thin layer of asphalt.

"It's softer than (traditional) asphalt, so you can't use it on busy roads," [Pennsylvania DOT executive Jeff] Karr said. "But it's perfect for back roads that have become deformed."

The approach has been used for almost 40 years, but resurges every time oil costs rise:


Although local PennDOT districts just recently started rebuilding roads with recycled asphalt, it's been done elsewhere since the 1970s, said Dave Newcomb, vice president for research and technology at the National Asphalt Pavement Association in Lanham, Md. About 100 million tons of asphalt are recycled each year, the association says.

The oil embargo drove its early use, Newcomb said. Asphalt is a by-product of oil refining. Interest was renewed in 2006 and 2007 when fuel prices soared, Newcomb said.

"It's a win-win for everyone," Newcomb said. "Departments of transportation are saving money, and it's definitely a good thing environmentally, in terms of there being less aggregate (used in asphalt) being taken out of quarries and the oil saved. The beauty is, you can continually recycle."