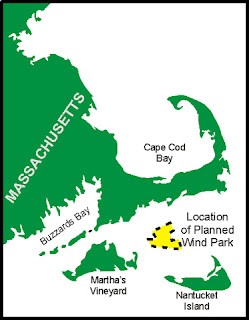 This is a repost from the Hydrovolts blog, originally posted on 6/6/10.


Why does it take more than 9 years and endless anguish to allow wind turbines in Nantucket Sound, but deepwater oil drilling routinely has environmental impact studies waived, supposedly because massive oil spills are unlikely? The oil industry has received approvals with potentially severe environmental impacts in as little as 10 minutes. Contrast the (over-)abundance of caution for wind and the cozy practice of superficial scrutiny for oil. Recent events make the dissonance especially jarring.

The Cape Wind offshore wind farm is closer than ever to the start of construction. Just more than a week after the explosion of BP's Deepwater Horizon platform, US Interior Secretary Ken Salazar gave formal approval, saying:


After careful consideration of all the concerns expressed during the lengthy review and consultation process and thorough analyses of the many factors involved, I find that the public benefits weigh in favor of approving the Cape Wind project at the Horseshoe Shoal location. With this decision we are beginning a new direction in our Nation’s energy future, ushering in America’s first offshore wind energy facility and opening a new chapter in the history of this region.

The project had previously won support from six state governors, many of whom hope to see wind farms built off their state's coastlines as well.

Developer Cape Wind Associates has spent nine years and $45M on analyses and studies to deal with endless procedural and legal roadblocks. Opponents of the project have spent a reported $20M to throw up all manner of objections: Bird and bat mortality. Impaired fisheries. Navigation problems. Ugly views. Damaged lobster habitat. Loss of cultural and historical value. Costly power.

Offshore wind farms have been built and operated in Europe for decades. These objections have all proven baseless, over-blown, or amenable to common-sense mitigation. No disasters predicted by opponents there have been borne out. Cape Wind will be economically viable: they have signed a power purchase agreement with National Grid at a competitive price. National Grid president Tom King remarked:


It’s truly fitting that the next milestone in our nation’s clean energy revolution is taking place in the Bay State and New England. We believe this project will provide long-term economic and environmental benefits here, throughout the region and across the nation. We absolutely must develop our homegrown renewable energy resources if we are to meet state and federal renewable goals, secure our energy future and seize the leadership position in the global clean energy economy.

Opponents of Cape Wind and similar renewable energy projects offshore need to take a hard look at their reasons for obstruction. Unless they don't own a car, live in an unheated yurt, grow their own food, and never buy any product not made locally of local materials they depend on the modern energy economy too. From where will that energy come? This is what the end of the Age of Oil looks like. While the transition from oil will take decades, alas, our future energy must inevitably come from something else. Concern trolling about impacts to birds, marine life, fisheries, views and the rest cannot now be taken seriously compared to this: 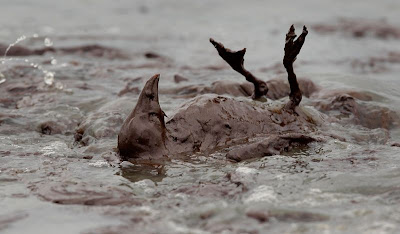 Our future energy security will require more than one offshore wind farm per decade. Maine recently announced its intention to foster development of offshore wind that would generate more than twice the state's current electrical needs by 2030. There are many imbalances between the dirty fossil energy of our present and the clean renewable energy of our future. These imbalances include disparate subsidies, disproportionate lobbying power, vast differences in available capital, and a stark divergence about what is in the public's long term interest.

So many things need to change, but redressing the unconscionable and indefensibly vast divergence in permitting burdens and timelines would be a good place to start.
Posted by Unknown at 11:50 PM