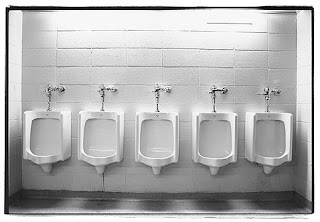 
By weight, urine contains roughly 2 per cent urea, and each urea molecule contains four hydrogen atoms, which, crucially, are less tightly bound to the molecule than the hydrogen in water. Splitting these bonds would require less energy, making hydrogen production more efficient.

The hydrogen of course can be truned to energy very easily. Chemically:

It's intriguing to think of having a fuel cell in the field that can be fueled by pee, which in turn is mostly formed from water, which we drink. Urinate in a container and charge batteries. There are also large scale applications, particulalry from animal husbandry.

Bt what about the carbon emissions?
Posted by Unknown at 11:23 PM