"The Administration continues to prevent, delay and obstruct development of [oil and gas] and puts off jobs for another day" 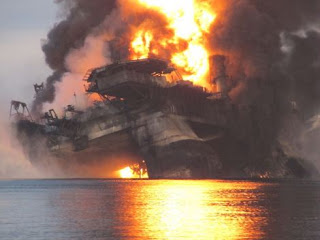 ~ This allegation, by Erik Milito of the API, and many others like it, are zombies of political mendacity. They just won't die!

We've been hearing this since the start of the Obama Administration. It both ignores the larger truth, and has been consistently wrong for three years.

What occasioned the latest surge of reflexive outrage? The announcement of the proposed management plan to develop oil and gas on Alaska's North Slope. That's right—a management plan. Not an unfettered free-for-all of fossil drilling frenzy certainly, but not a moratorium either. According to US Interior Secretary Ken Salazar, "About 11.8 million acres would be available for leasing, including most land projected to contain oil reserves." According to Alaska Senator Murkowski, however, it is the "most restrictive management plan possible." Um, no. The most restrictive plan would be to, you know, actually "prevent, delay and obstruct" rather than what the Administration actually has done—open up the richest half of the entire National Petroleum Reserve.

In the overheated, hyperbolic rhetoric of response, the API and its bought-and-paid-for Congressional toadies call anything less than carte blanche to Big Oil intolerable obstruction. This is not obstruction, it's a prudent balance—here between development, an extremely sensitive environment, and the traditional subsistence culture of the indigenous Alaskans. The breathless alarmism of Murkowski, Milito and others inveighs against a supposed extremism that is thoroughly fictitious. Current politics on this, as on so many subjects, ignores that American government is designed to produce compromise in matters of policy. Just as parents should not cater to every demand of a 4-year old, so too should our government not cater to every demand of the incessantly whining Fossil lobby.

In the same presser, Salazar also commented on the cause of delays to Shell Oil's plans to embark on offshore oil exploration. Ironically, it is due neither to the environment nor to government regulation—Shell has simply been unable to finish work to build, test and validate its spill containment ship and systems. Being prepared for the inevitable spills (or worse) is exactly the kind of minimal regulatory oversight required, and which all but the zealots think forms part of a sensible compromise.

Meanwhile, one of Congress' leading clowns pursues a fishing expedition pointless even by that body's abyssal standards.


U.S. Rep. Doc Hastings, R-Wash., chairman of the House Natural Resources Committee, said the committee is considering whether to subpoena the Interior Department to force it to respond to questions about the need for the moratorium.

"While the actions of the Interior Department demonstrate it has chosen to ignore the legitimate oversight responsibilities of the committee, we are dedicated to acquiring information and straight answers about the decisions and actions of the administration that caused lost jobs and economic harm in the gulf," he said in a statement.

BP, Haliburton, Transocean and the rest of that finger-pointing brigade must be quite pleased to learn that it wasn't their catastrophic Deepwater Horizon fiasco that "caused lost jobs and economic harm" but rather our government, acting to protect the interests of the public in making sure it wouldn't happen again. As Shell shows, industry, despite how deeply they want us to accept their earnestness to do differently, still isn't ready. Said Salazar:


"It's not a matter of ice, it's a matter of whether Shell has the mechanical capability" to comply with the exploration plan that had been approved.

Before the industry and its political shills start castigating compromise as obstruction and complaining about delays, they should look to their own lack of preparedness and their skimpy credibility as the real reasons the adults in the room aren't instantly giving them every last thing they demand.