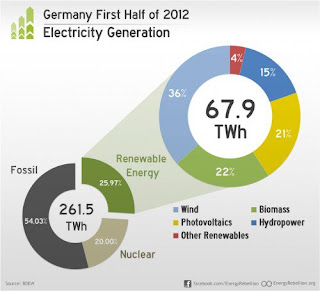 ~ Europe's largest national economy hit a milestone in the first half of this year—for the first time, 25% of German electricity generation came from renewable sources.


Wind energy was the largest contributor of green power, accounting for 9.2 percent of all energy output... Biomass, or material acquired from living organisms, accounted for 5.7 percent and solar technology for 5.3 percent.

Germany is the largest market for electricity in Europe, and has long been a leader in boldly reshaping its energy policy, including forswearing all nuclear after Japan's Fukushima disaster.

Interestingly, the policy has been driven the past many years by the country's conservative parties. Preserving resources and the environment for the future is a truly conservative notion, a truth lost on this country's radicals who inappropriately like to be called conservative.
Posted by Unknown at 11:25 PM