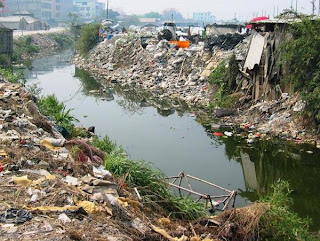 ~ Most people with any environmental consciousness know not to throw obsolete or nonfunctional electronics in the trash. Such e-waste ends up in landfills where, over time, they release dioxins, heavy metals and other poisons into the ground and ultimately into the water table.


Guiyu, China is often referred to as the “e-waste capital of the world.” The city employs over 150,000 e-waste workers that toil through 16-hour days dis-assembling old computers and recapturing whatever metals and parts they can re-use or sell. This is far from an organized operation, however. Rather than having computers neatly stacked on palettes in storage units waiting to be recycled, computer carcasses are strewn about the streets and river banks. Huge tangles of wires and cables lay on street corners. Workers, whom will usually specialize in dis-assembling specific parts, will pull parts from the various scattered piles of parts about town and begin their work right on the street.

Most e-waste in the US is shipped to China, where the "process" better resembles lawless and anarchic scavenging rather than the clean impression that "recycling" conjures. It is a barely regulated or monitored activity that employs millions driven by poverty to sacrifice their health to survive. Workers burn circuit boards and other components over coal fires to recover lead solder and use acid baths to leach out valuable metals. Tons of waste are dumped wherever for wind and water to eventually carry away.


The environmental and health effects of this activity are extremely damaging. The air is not safe to breathe, the water not safe to drink. Lead and other poisonous metals course through the veins of the residents. Greenpeace sent crews to Guiyu to measure ground samples and test the water supply. Over 10 heavy (and some poisonous) metals were found, such as lead, mercury, tin, aluminum, and cadmium. Drinking water has to be trucked in as the local river and underground water table are poisonous. Guiyu has the highest level of cancer-causing dioxins in the world; pregnancies are six times more likely to end in miscarriage and seven out of ten children are born with 50% higher levels of lead in their blood than children born elsewhere.

The waste goes to China because the $2 (or less) in value of the scavenged materials cannot be extracted profitably anywhere else. Estimates of the amount of e-waste created just in the US are staggering: 130,000 computers are trashed every day, and more than 1,000,000 cell phones a year.


The residents [of Guiyu] are only partially aware of the significant negative health effects. They understand that conditions aren’t the best, but the higher than average wage keeps them working in Guiyu. Dis-assemblers in Guiyu earn about $8 a day – almost five times what many earned as peasant farmers before. With a lack of major industry in the area, even more were previously unemployed so destitution drives many to the hazardous work. In fact, many Chinese actually move to Guiyu in hopes of earning the attractive wages. Activists have lamented that these people must choose between poverty and poison – something no human should have to do.

88% of workers suffer from neurological, respiratory, or digestive abnormalities. A similar number also suffer from some form of skin disease.

The good news in all of this will take years or decades to arrive. The modern economy demands many inputs, and a disturbing number of industrial commodities have limited and dwindling supplies. Ultimately, basic supply and demand will necessitate (much) higher prices, and the economics of recovering reusable materials in discarded electronics should improve.

Meanwhile, humans will unsustainably continue to consume resources and despoil the planet.

Over the last 30 years I have collected an enormous boneyard of electronics which I repurpose and reuse as best I can, but the vast bulk (to the ongoing displeasure of my wife) remain in a growing number of boxes that I lack a responsible way to discard. I can create underpowered, but serviceable network servers from old Pentium systems and complete systems can be given to some organizations, like Rotary's Computers for the World, that provide them to developing world areas where newer equipment is unavailable or unaffordable. Sadly, such systems will in time fail, and the disposal practices in such locations are doubtless as bad or worse. There are benefits to the recipient communities in education and standards or living, but it is a stop-gap and only partial solution to this daunting problem.
Posted by Unknown at 11:43 PM