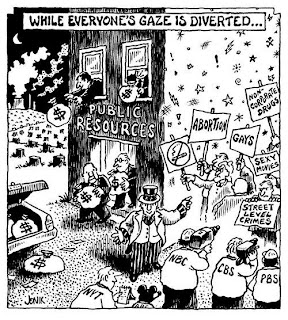 ~ Too many voters obsess on the trivial and the unimportant. We are regaled with endless sideshows that distract from the serious policy issues on which the upcoming election ought really to turn. The news media is thoroughly and shamefully complicit, concentrated as they are, and driven by profit, leading to an emphasis not on news, but on entertainment of an increasingly uninformed and uncritical audience.

I had an exchange on Facebook with a friend who sincerely believes that President Obama needs to release his academic transcripts. In his view, there is as legitimate a need for disclosure on this as on candidate Romney's tax returns. Seriously. Never mind that one illuminates tax policy, a core issue in the election because nearly every other decision and policy choice in our country's future hinges on it. And the other, academic transcripts of decades ago, would illuminate what exactly? Nothing of substance. It's a sideshow, a distraction, a circus.

Little wonder the defenders of Citizens United and unlimited money in politics are fighting so hard to preserve that misbegotten decision. Lots of money buys lots of slick entertainment designed to titillate, outrage and provoke. Education fails in comparison and falls by the wayside, and our "news" is dominated by the sensationally irrelevant. As collective ignorance grows, our democracy withers.
Posted by Unknown at 11:25 PM