~ This false equivalence can be found in every debate, from climate change to the deficit: 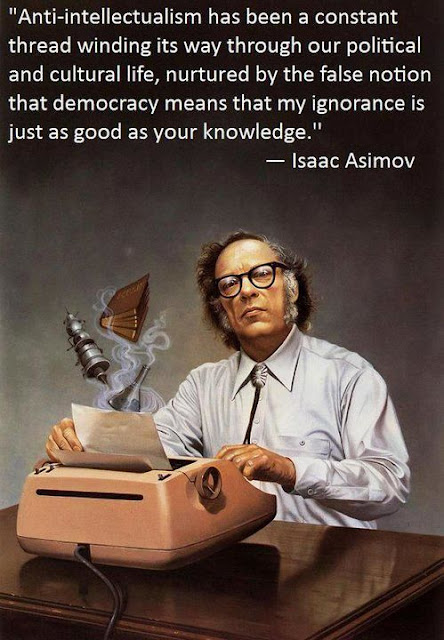 However, it is still one person, one vote. If the price of liberty is eternal vigilance, we are all at substantial risk from the ignorant who know not what to watch, how to evaluate what they see, the impact of their actions, or the corrosive decay that arises from their fatigued cynicism or apathetic indifference.

It's rare indeed that I can favorably quote anything from the Cato Institute, but here is the lead paragraph to a 2004 piece of "policy analysis":


Democracy demands an informed electorate. Voters who lack adequate knowledge about politics will find it difficult to control public policy. Inadequate voter knowledge prevents government from reflecting the will of the people in any meaningful way. Such ignorance also raises doubts about democracy as a means of serving the interests of a majority. Voters who lack sufficient knowledge may be manipulated by elites. They may also demand policies that contravene their own interests.

Elites are manipulating a-plenty nowadays. The Cato prescription—to dumb down government into some vestigial rump to match the "rational" ignorance of the people—seems less aligned with the vision of that lion of advocacy for an educated populace, Thomas Jefferson:


If a nation expects to be ignorant and free, in a state of civilization, it expects what never was and never will be.

Education is the people's bulwark against the erosion of democracy, and we certainly cannot rely on our political leaders to educate, as the interest of far too few is the betterment of America rather than the betterment of themselves, their cronies and their vital campaign contributors. Our stenographic press shirks its constitutionally enshrined role as a purveyor of an idea meritocracy. It no longer functions as an organ of education, but rather of entertainment, ginning up controversy and fomenting emotional rather than reasoned responses to the pressing policy matters of the day.

In the end, today's problems always circle back to the corporate capture of our institutions of civil democracy: government, the press and even the courts are now beholden to moneyed interests whose bidding they increasingly, and ever-more brazenly serve.

I'd like to suggest that conservatives and others caterwauling about threats to the American way of life, even as they run around brandishing their pocket copies of the Constitution, pull that venerable document out and study it a long moment. In it, the words "corporate" and "corporation" nowhere appear.

The de facto and de jure elevation of corporate "rights" is not a constitutional construct, but is a recent and decidedly less foundational an artifice which today resembles less the considered wisdom of the Founders than the opportunism and naked greed which characterized the robber baron era. (Calls for austerity fit neatly into this historical echo our ignorance seems condemned to have us repeat.)

The Tea Baggers and others are right when they say that we need to get our government back, but pervasive propaganda and their ignorance blind them to the actual danger. It is not an overbearing, profligate nanny state that threatens our democracy, rather it is its evisceration by those for whom democracy is an impediment. In another time such people were royalists, nobles, lords. Later groups included the industrialists, the robber barons, the trusts. Today the dangerous groups are not the unions, immigrants, intellectuals or minorities. Those who now work constantly to pervert democracy to their selfish and self-serving ends are rather the elites of the modern era, multinational corporations, global financiers, the entrenched political and economic elites that infest Wall Street and parasitize our government.

An apostate Warren Buffett nails it: