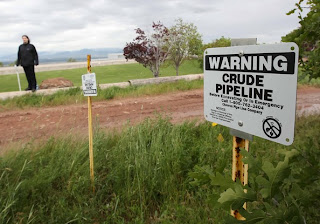 ~ In theory a decision on whether to grant the go-ahead on the Keystone XL pipeline won't be made until the end of the year. However, Hilary Clinton at State has, incredibly, signaled her OK with it by endorsing a final EIS that avers no significant environmental impacts.

And then there's the carbon emissions from the tar sands themselves, the development of which the pipeline will accelerate. Stabilizing the climate is looking increasingly like a long shot; this pushes it off the plane of possibility over the edge into the abyss of hopelessness.

Yeah, but it creates jobs!

Boosters of the pipeline are relentlessly on message about the economic wonders it will supposedly provide. Like oil drilling offshore in deep water, they are probably right. And just like deepwater drilling, there will likely be other indirect jobs created to cope with the spills, the health impacts and so on. Also like other petrochemical activities, the environmental degradation and despoilment it inevitably engenders will destroy jobs as well.

Why is the creation of jobs always provide an acceptable rationale for any dirty energy project, but renewable energy project jobs are dismissed as inconsequential? Oil is an inferior job source, as well as unsustainable, environmentally bad and dangerous to national security. It's also making us less globally competitive. Said VP Joe Biden, at the National Clean Energy Summit in Las Vegas, echoing any number of President Obama's statements over the past 3+ years:

But following is exactly the path we are taking as a country. Obama is fond of rhetorical support of renewable energy but in practice he stands aside while Congress eviscerates any meaningful and lasting support even as it throws more into dirty energy. Big Oil, their lobbyists and their captive legislators have captured the lawmaking process and are well along in controlling the regulatory apparatus. And now the Administration is preparing to give them what they want without a peep.


When all is said and done, there's a lot more said than done.

Or as the old saying goes: hope is not a plan.