After the depressing news of what is happening to oysters, I thought I would repost this from 12/13/09.


~ Climate change deniers have been in full throat since the breaking of SwiftHack (often poorly and misleadingly named as "Climategate".) This supposed "scandal" is a calculated piece of propaganda, timed for maximum impact on the Copenhagen conference and transmorgified and regurgitated for brazenly craven reasons by the right-wing noise machine.

Their intellectual coherency, the relevancy of what they say... it reminds me of something I heard once...


"The time has come," the Walrus said,
"To talk of many things:
Of shoes--and ships--and sealing-wax--
Of cabbages--and kings--
And why the sea is boiling hot--
And whether pigs have wings."

You cannot relate such nonsense to anything real; it is all blather and pomposity masquerading as deep thinking. Fortunately, there are some who cut through the miasma of misdirection.

Our oceans are in serious trouble. US Representative Jay Inslee (D-WA) brought factual relevancy as well as some authentic passion to a hearing on the damage happening to them from climate change:


Rep. Inslee confessed to having "a little emotion" about the issue of the fisheries in the shallow Pacific coast waters and whether they could survive the growing acidification. This is the key part (about 4:03 in the video):

Lost in the sturm and drang about whether climate change is "real" are indisputable effects such as the encroaching death of our oceans due to radically increased carbon in the atmosphere. 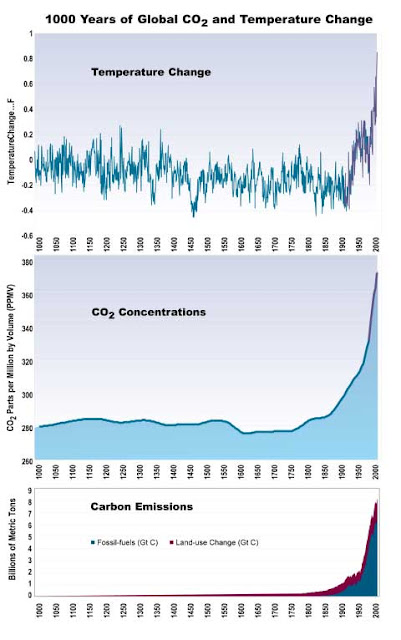 The buffering long provided by the oceans is starting to fail.

The objection that the carbon dioxide level was higher in past eons is specious. It's not that it has been higher, it's the rate at which it is changing which alarms. Given sufficient time species can adapt to changing temperatures, changing pH levels, or changing concentrations of atmospheric constituents.

Imagine the windshield on your car is covered in frost (this doesn't require much imagination around western Washington the past week or so!) One way to deice it would be to heat it up slowly with the car's defroster, which would slowly melt it away. Another way would be to pour warm water on it; you'd rid it of the ice in a trice, but the rate of temperature change would almost certainly break the glass. The glass ends up at the same temperature, but the rate makes all the difference.

The rapidity of the change in atmospheric carbon concentrations is breaking our oceans.

The concern trolls speak portentously about "junk science" and the supposed corruption of science to political ends. Their sincerity, however, rings hollow.


"I weep for you," the Walrus said:
"I deeply sympathize."
With sobs and tears he sorted out
Those of the largest size,
Holding his pocket-handkerchief
Before his streaming eyes.

What do you think will become of the oysters if the climate walruses prevail?