~ I'll write much more about Solyndra another day, but one meme heard currently is the undue influence supposedly exerted by renewable energy companies in their quest for subsidization and financial risk mitigation. A new report from DBL Investors is timely, especially its lead quotation which sets the tone of the report:


Some argue that the consumer can purchase warmth or work or mobility at less cost by means of coal or oil or nuclear energy than by means of sunshine or wind or biomass. The argument concludes that this fact, in and of itself, relegates renewable energy resources to a small place in the national energy budget. The argument would be valid if energy prices were set in perfectly competitive markets. They are not. The costs of energy production have been underwritten unevenly among energy resources by the Federal Government.

The report shows government subsidy support for different forms of energy over time, with a focus on the earliest stages of each energy industry's growth. Thus, it shows the extent to which subsidies were provided to different energy technologies when each of those technologies were as yet new and unproven, lacking infrastructure and market adoption.


With differing periods and different eras, comparisons are difficult. But the report calculates that nuclear subsidies came to more than 1 percent of the federal budget in their first 15 years, and that oil and gas subsidies made up one-half of 1 percent of the total budget in their first 15 years. “Renewables have constituted only about a tenth of a percent," the report says.

The money graph, in more ways than one: 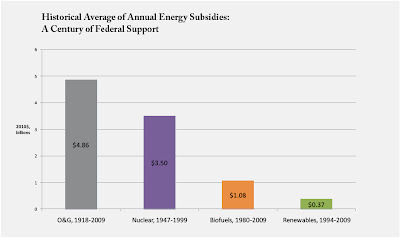 The disparate support for renewable energy extends beyond just funding and industry subsidy of course. Also critical is the constancy of that support. While oil and gas enjoy permanent subsidies in the tax code and elsewhere that have attained near untouchable status, renewable energy must scrap and fight to renew its paltry assistance near-annually, as all its subsidies sunset in just a handful of years at most.

It's not hard to guess why renewables get short shrift: follow the money:


While the fact that major industries shower Washington with cash should surprise no one, the numbers are staggering when broken down by member. Energy industries -- just one slice of the private sector -- spent the equivalent of $5.5 million per seat for all 535 seats in the Senate and House of Representatives from 2001 through the first half of 2010. During the first quarter of 2010, energy interests spent $3.2 million per day that Congress was in session -- about $244,000 per member. Only the health care industry spent more.

And, no surprise, the titanic energy incumbents did most of the spending, and thus got the best results.
Posted by Unknown at 11:01 PM