Last week's picture was shot from my car window while driving south along the doomed Alaskan Way Viaduct. It shows, as several of you guessed, the operations of Seattle Steam:


Seattle Steam is a privately-owned utility that provides reliable and sustainable heat to approximately 200 buildings in Seattle's Central Business District and First Hill neighborhoods. Seattle Steam's mission is to deliver a reliable, cost-effective and efficient source of heat that benefits its customers, the environment and the Seattle community. 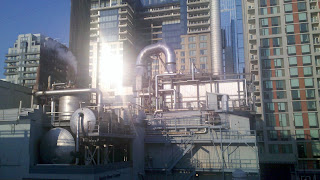 Seattle Steam is a district energy system that provides heat to multiple customers from one central plant, a much more efficient approach than each building having its own boiler. Even though they have traditionally burned natural gas and diesel (but are moving to biomass) it still is environmentally friendlier. There are many other uses of steam beyond heat as well, and one interesting aspect of their business is how many customers use the steam for other purposes:

Their statistics are impressive: 191 customers served 24/7/365. Even more amazing: they've been doing this for more than 100 years. That's a long green record!
Posted by Unknown at 10:39 PM