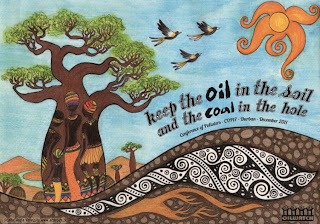 ~ We should leave our fossil fuels in the ground.

Keeping more of our fossil fuel wealth in the ground would increase our energy security in two ways:

First, it would spur increased focus on alternative energy sources and could accelerate the development and adoption of more sustainable energy sources that require no imports.

Second, it would preserve those fossil fuels for potential use in an increasingly uncertain future.

This second point is utterly lost on the "drill, baby, drill" crowd.

With the cheerleading of the API, and munificently funded by the Fossil Industry, oil drilling advocates love to argue that increasing domestic drilling also increases our energy security, because, they say, "it reduces our dependence on imported fuels." While it may be true that increased production at home means importing less oil and gas today, the accelerated depletion of reserves means that we would inevitably need to import much more tomorrow.

In the case of US oil and gas production, the supposed national security rationale for increased production is even more bizarre. Even as they press for more drilling, public officials and industry leaders advocate for increased exports. How does extracting more of our fossil fuel wealth and sending it overseas make us safer or more secure?

The world is running short of a growing number of critical industrial materials. Many countries are starting to recognize that their economic interest, and even their national security may depend on preserving those resources rather than feeding an insatiable world demand for their export. China is doing it with rare earth and some other elements, and Saudi Arabia is doing it with oil. It is a rising trend as more countries seek to protect their futures by limiting the export of their natural wealth. We should be doing it too, with oil and gas.

The only reason to more aggressively produce oil and gas is to make the Fossil Industry even richer. Doing so, however, also makes us as a nation progressively poorer.