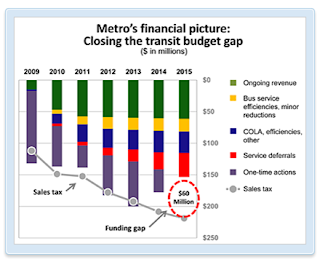 ~ Once again, Metro Transit has a revenue shortfall.

And once again, the proposed solution is to cut service, and further diminish pubic transit.

It's a vicious circle, or perhaps more accurately, a death spiral. As routes are cut or curtailed, the overall utility of the system suffers as well. As the system becomes less useful and timely, people use it less, and revenues from the fare box decrease.

Conversely, increasing service and making transit more available, more accessible, and especially, more affordable, increases ridership. Public transit use has been increasing locally; we should be building on that, not thwarting it.

Metro Transit needs additional funding. Cost cutting is but a slogan, not a real, considered solution that would make a (positive) difference. Fully funding public transit increases use of the system, promoting urban vitality, reducing congestion and air pollution, and improving our quality of life. In fact, public transit should be free; the costs and benefits are very favorable compared to alternative public expenditures, particularly car infrastructure.

There is a public hearing tomorrow afternoon.