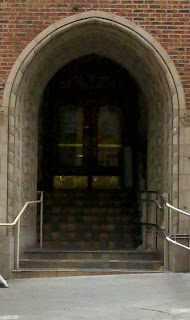 Last week's picture shows a remnant arch, one of several architectural pieces preserved from the former Burke building which stood at the corner of 2nd and Marion. The Exchange Building is in the background.

The picture below shows the entrance arch as it existed in the original building. 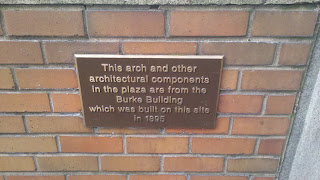 It was torn down in 1971; the site is now occupied by the Henry M. Jackson Federal Building. Thomas Burke was a lawyer, judge and railroad builder. Both the Burke Museum and the Burke-Gilman Trail are named in his honor.
Posted by Unknown at 11:12 PM