Living and Dying in 3D 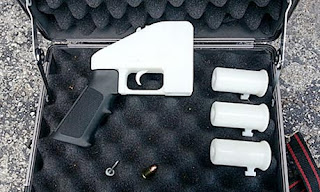 The incredible advances in 3D printing, and the rapidly shrinking costs, have made weapons like the Liberator pistol inevitable. We may not need to worry—yet—but it is only a matter of time before it revolutionizes many things, including crime.

3D printing is poised to be another new technology where the capabilities are increasing and becoming more widespread faster than policy can keep up. Not just guns, but many other things, at least in theory, can and will be built from this technology, whether in the privacy of your home, or, without the capital expense, at your local store. Many kinds of things have already been made. In the future, perhaps the very near future, one will be able to print not just prosaic hardware, but other weapons, chemicals, even animal or human tissue, meat, drugs (legal or not)—maybe whatever one can imagine. Forget postal regulations, export controls, anti-proliferation, regulation, or licensing which all may become quaint notions of a simpler time.


Expect some lawmakers to use this as a reason for tighter control and ubiquitous monitoring of the Internet. Having the unfettered ability to print what you want may not, in the end, make us freer to do what we want, but instead lead to greater governmental intrusion. It's not the Second Amendment at play here, but the First.

The US government has already leaped into action, but only after the download of at least 100,000 copies of the Liberator. Already there have been calls by a US Representative and a Senator for restrictions on the technology or its dissemination.

So, in the aftermath of the defeat of gun legislation requiring universal (and eminently sensible) background checks, let's listen to what the NRA had to say about these calls for a new kind of gun control:

Actually, this isn't really a surprise. I wouldn't expect the NRA to squawk about restricting 3D printing of guns, since it is abundantly clear that they represent gun manufacturers, not gun owners. 90% of the US public, and a majority of NRA members and gun owners may support more restrictions on guns, but their manufacturers do not, so long as they are the only ones making them in any volumes.
Posted by Unknown at 11:00 PM