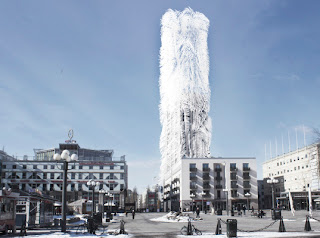 ~ Here comes another unusual-looking building, the Strawscraper, which employs a hair-like covering which the wind ruffles to produce electricity:


The system utilizes Piezoelectric technology, which turns movement into electricity that can be stored for later use. The hair’s tiny movement is safe for birds and humans and isn’t noisy like traditional turbines can be. But Strawscraper isn’t all about the brains, it also has the beauty. The hair covering the building creates the illusion of movement, giving the normally static city skyline the illusion of motion.

While London's Strata Tower is still "expected" to generate perhaps 8% of the building's energy needs, after three years there is as yet no indication of the actual power produced. Perhaps sensibly, a power estimate is not being offered for the Strawscraper. 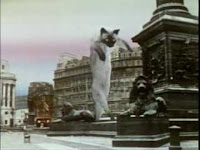