~ The number and severity of economic losses from extreme weather events has been on the rise for years: 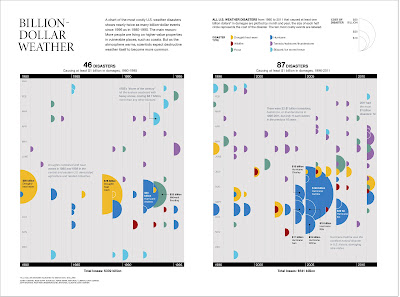 Several interesting things pop out from this graphic:
Total damages are on the rise, and losses over the past decade exceeded half a trillion dollars. Given concerns about budget deficits, reducing that expense would be a worthwhile object of public policy discussion.

While direct linkage to climate change is notoriously difficult to prove in individual cases, the overall picture over the past 20 years cannot otherwise be easily explained. Engaging in puerile finger-pointing and self-interested politics is not befitting those we expect to provide leadership for the country as a whole.
Posted by Unknown at 11:41 PM