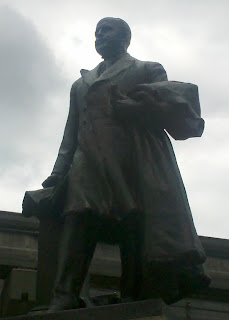 Although it seems as if he's sporting an iPod, it's seemingly a prank and offers no hints... Answer next week. 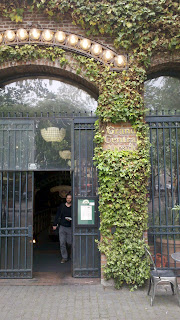 This lovely meeting point was originally Squire’s Opera House, erected in 1879 by Watson Squire, who became one of Washington’s first senators after it achieved statehood. When the Opera House burned down, it was rebuilt as the Squire-Latimer Building and later became the Grand Central Hotel. The hotel died during the Depression, but it underwent a major restoration in the 1970s and now contains two floors of shops, including the excellent Grand Central Baking Co.

This view is from Occidental Park. Had lunch there last week; the beef barley soup was hearty and flavorful.
Posted by Unknown at 11:34 PM