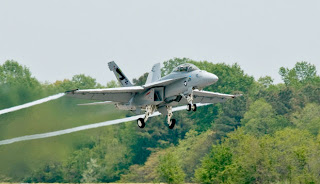 ~ The GOP hatred for all renewable energy technologies has jumped the shark.

They are no longer content with demagoguery about Solyndra, squelching renewable energy, and gutting regulations to promote drilling on every square inch of land and sea. No, now they even demand a prohibition on the development of alternative fuel capability by the US military.

There was a time that our military leaders got pretty much whatever they wanted if they made any kind of case that it supported the warfighter or enhanced national security. No more. Evidently "support the troops" is a political bromide or a bumper sticker, but not something that covers the making of policy if military leadership dares an initiative that bucks GOP ideology, or annoys its campaign bagmen.


As the nation’s single biggest energy consumer, the Pentagon has many reasons to want to diversify its fuel sources. Mabus and others say the move toward alternative energy is about national security and assured sources of supply.

In addition, with oil supplying 80 percent of the military’s energy, the impact of price fluctuations ripples quickly through the system.

Conservation and alternatives are smart policy. Each dollar increase in the price of a barrel of crude oil increases the military's fuel costs by $130M.


“One thing the Department of Defense is really good at is risk management and long-term strategic planning,” said Bob Barnes, a retired Army brigadier general who now focuses on the intersection between conservation, energy and national security as a senior policy adviser to the Nature Conservancy.

Placing political ambition and ideological obeisance ahead of the national interest is reprehensible. Overruling the professionals who manage our long-term military readiness is reckless and indefensible. First the economy, then national competitiveness, and now defense, all to advance a lock-step ideology, reward political contributors, and pursue temporal partisan advantage, all at the country's expense. At what point does this become treason?
Posted by Unknown at 11:51 PM