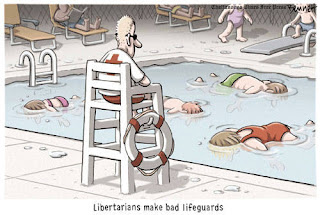 ~ One broad side of political argument today is based on the unshakable belief that, left alone, people will make good choices that benefit themselves and in turn, benefit society as a whole. Does experience support that belief?

There are numerous examples of this magical thinking. For example:

The idea is that individuals, or local communities, or the smallest and most local government possible make better decisions than large one-size-fits-all institutions. Thus, fracking regulations should be left to the states, and federal government, if it is allowed to exist at all, should not spend taxes on anything, but simply pass the money to the states in block grants.

But notice that these are all economic arguments. In areas of true personal decision-making, many who argue for laissez-faire economics sing a very different tune.
Meanwhile, driving is more heavily regulated than guns. Speeding. Drinking. Texting. All verboten. Not all decisions people make about guns and their use are very sensible or in society's interest either.

People make decisions for all kinds of reasons, or no reason at all. Many decide in a way that is completely irrational and not in the best interest of themselves or others.

So why do we assume that their economic decisions are always rational, or even beneficial? One not look far to find terrible economic decisions either—sub-prime mortgages, payday loans, excessive credit card debt, McMansions, ...

If there are good reasons for endless tax cuts, radical deregulation and the rest of the doctrinaire free-market agenda (which I doubt) the supposed superiority of individual decision-making is not among them.
Posted by Unknown at 11:47 PM